Think Before You Share — Digital Citizenship Starts At Home 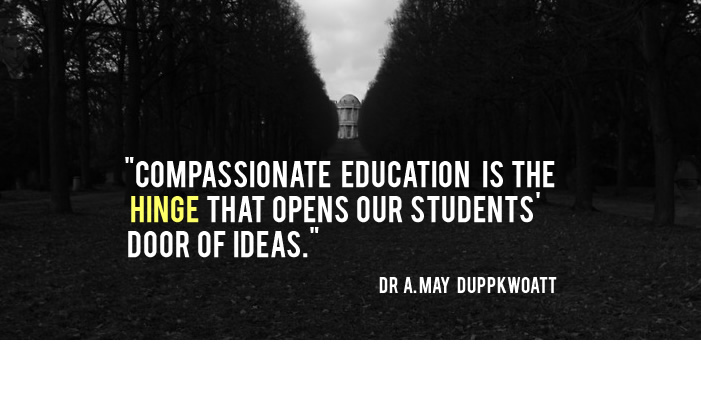 On Saturday, we did a little experiment on Twitter. More about which later.

After discovering a website that had replicated one of his articles word for word without asking his permission, Tom Bennett recently wrote a post on What To Do If Someone Steals Your Writing. It’s an interesting read and the copyright statements at the end are useful.

** AN ASIDE… The irony of the fact the above blog lives on the TES website wasn’t lost on us. We don’t house any free resources on the TES site (we used to) since we found that they were re-posting them on sister sites without our permission along with a wording that implied the resources were theirs and small print where any uploaded “waives any moral rights to the content”. If you care about where stuff you make ends up and want it still to belong to you, Julian Wood’s blog on the subject (posted long before anyone else realised what was going on) is an important read: Do you own your ideas? **

The way the internet has developed in recent years has led to more and more replication of content. We’ve moved from Web 1.0 (the term given to the original, read-only, mostly informative internet), through Web 2.0 (where sites became much more social, users generated their own content and collaborated more) to Web 3.0 (dynamic content and a more portable, personal internet). Our students have grown up in a world where Web 2.0 is normality — a whole host of sites and ideas that allowed for more collaboration than ever before. And with collaboration came the ability to take something, remix it and send it on its way. 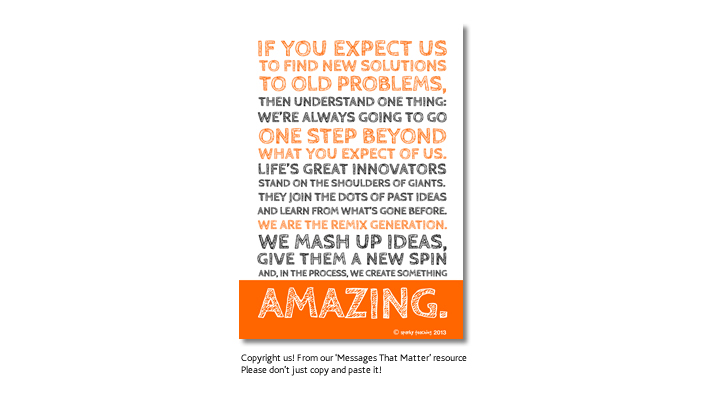 Think for a moment of the words we use to describe what we can do on Twitter, Facebook, Pinterest etc. — post, retweet, share, embed, pin — all words that mean “take something and send on to a new audience”. Of course, that something can be something we’ve generated ourselves — a photo we’ve taken or a comment about a TV programme. But, more often than not, we’re sharing something we’ve got from somewhere else — an inspiring quote or an amusing video of some sheep.

** ANOTHER ASIDE… Here’s an amusing video of some sheep:


You must have had the experience, as we have, of setting a task in class to research a particular topic in their own words and getting back copied and pasted information from the first three sites when you search for “Viking houses” on Google. You’d have thought they’d have used Bing or something…

A simple right-click, copy and paste (or CTRL+C then CTRL+V for the hardcore) and anything on the internet can be yours. It’s so easy. But for the folks who make the image or write the article, it’s a little galling where no credit is given. On one or two occasions we’ve been told by someone that “I’m going to enlarge that image, print it out and make a poster from it”. Disheartening, but what can you do? We’re all guilty of not crediting others, but if we want to teach our students to be good digital citizens and show appropriate online etiquette, we have to start practising what we preach.

Digital citizenship is something of a buzz word at the moment and, to our understanding, encompasses everything that can fit under the heading “how you conduct yourself online” and probably a whole lot more. Part of this (along with things like privacy, security, digital literacy) is online etiquette. The dos and don’ts of copyright, copying and crediting.

** A FURTHER ASIDE: If you’re a creative teacher and haven’t read either of Austin Kleon’s books: Steal Like An Artist or Show Your Work! why not? They’re not about teaching — they’re for anyone who is creative. In them, he talks about both the ideas of using others’ work to inspire your own, but also taking correct steps to credit it.

And so, here’s what we’re going to do about it… Will you join us?
1) Every time we tweet a website link, we’re going to do some digging and find out who’s behind it. That means, with the sorts of blog posts that showcase a particular thing, to click on the link that shows who originally took the photos or made the video. Then give that person a mention.
2) Try as hard as we can to avoid folks like @InterestingPics who tweet wondrous photos, but never seem to credit anyone ever for taking them. This one’s going to be hard, but we’ll do our best to give credit where it’s due.
3) Retweet as many folks as possible without adding a comment or making the tweet our own.
4) Do our best to have a Twitter feed that has more from other people and less from us on there (this is going to be hard for us!)
5) Every blog post we write, we’re going to attribute cartoons, illustrations etc to the correct person, with a link to their website where possible. All images will be stock ones, copyright-free or available for general use. In the next week or so, we’ll write a blog post where we collate all the free stock-image websites we use. There are a few and they’ll be really useful to you.
6) Listen more.
7) Be more critical when we see a quote — do some digging.

Which of the following quotes did Albert Einstein not say?
A) “Not everything that counts can be counted and not everything that can be counted counts“
B) “If the bee disappeared off the face of the earth, mankind would only have four years left to live“
C) “Everybody is a genius. But if you judge a fish by its ability to climb a tree, it will live its whole life believing it’s stupid.”

We don’t know for definite, but the likelihood is that he didn’t say any of them*, despite the fact you’ll have seen at least one of those quotes with an accompanying cartoon or hip typographical treatment on Twitter or Facebook.

*Here’s the evidence: Quote A, Quote B and Quote C.

As well as the obvious “Don’t-Believe-Everything-You-Read-On-The-Internet” and the secondary “Einstein-Said-Less-Than-You-Think”, there’s a third rule to consider here: “Some-Of-These-Quotes-Make-A-Whole-Lotta-Sense”. Maybe it didn’t come from Einstein, but the first quote is one we particularly concur with and get a lot of inspiration from. It drives what we do, actually. If you tweet it, we’ll Favourite/Like/Share it, no matter if it says Albert Einstein at the bottom or Enid Blyton. It’s wise. And it’s true.

On Saturday, following a discussion with @mrlockyer about a quote he’d made up which we were intrigued by (“Boredom is a choice you make on behalf of your class.” for all you Lockyerites out there), we decided to invent a nonsense quote and tweet it to see if people shared it as legitimate. Sadly, this is something we’ve got previous with. A while ago, we made a handful of “quotes” for folks to use in their classrooms to encourage students to think before they shared: 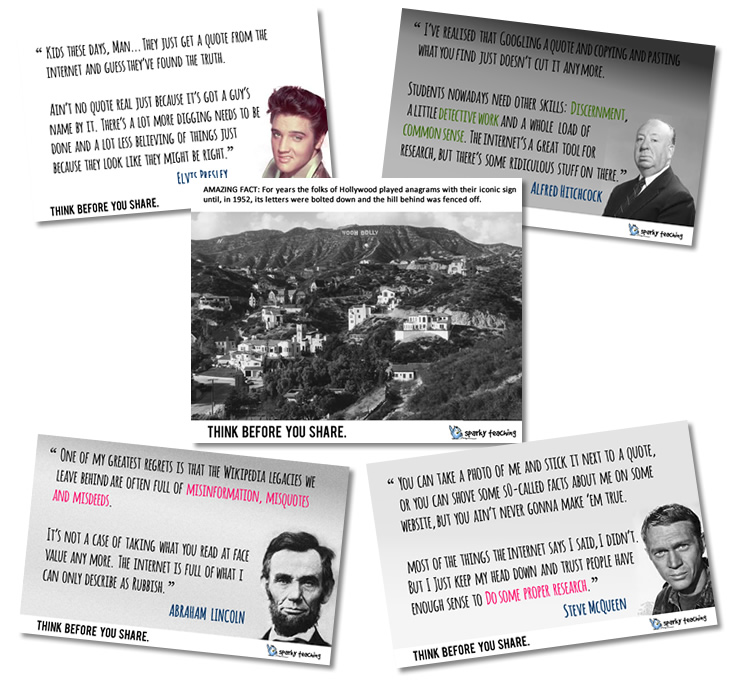 NB. The images we used here were labelled copyright-free! We were planning to make decent-sized versions for you to print out, so when we get round to it, we’ll put the link here.

The bogus quote we tweeted on Saturday was the one at right at the top of this post. You know? The one you barely glanced at as you scrolled down the page… We made the image, shoved Michael Gove and Mr Lockyer’s faces behind some trees for luck, invented a ridiculous name, accompanied it with a brief message and then sent it into the ether. Here is what happened: 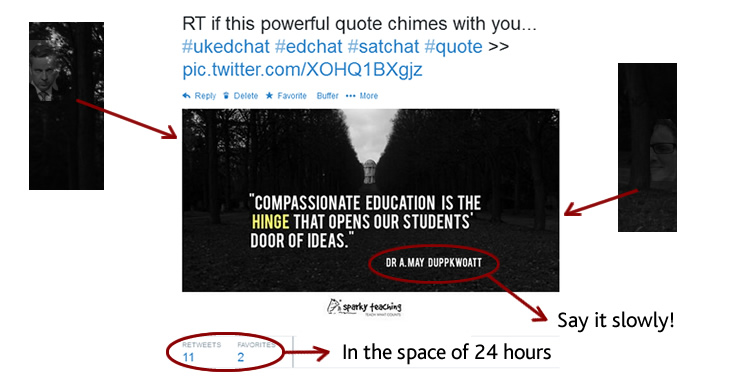 As soon as people started retweeting it, we immediately started to feel guilty. This was never an attempt to make people look silly. Those who favourited, retweeted — and even commented on — the quote shall remain nameless and we’ve deleted it today. To be fair, one person mentioned to us that she hadn’t heard it before, so Googled it when she saw it — the sign of a critical thinker!

However, there are probably a couple of conclusions we could draw from it…
1) We all should think a bit more before we share.
2) One man’s nonsense quote is another man’s inspiration.

In the powerful words of Ivan Othawon, “Learning is the pips. Understanding is the core.”