They Did You Can — a review 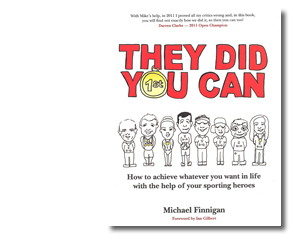 What does it take to be a champion?

We’ve already looked at how Gwen Christie’s whimsical ‘The Champion Hare’ answers this question for KS1 pupils. Now it’s the turn of Michael Finnigan’s ‘They Did You Can’ which draws heavily on the advice of sporting personalities to make its points. Although these are very different types of book, interestingly the answer is the same. It doesn’t matter whether you’re a fictional hare or a real-life sportsperson, success is all about attitude.

‘They Did You Can’ is a workbook (although the activities could easily be copied and used with a whole class or team) about you, your dreams and how, with the right attitude, you can go about trying to achieve them. Despite the fact it takes much from the sporting sphere, this is not a book about sport (as the back cover says : “this book is as much about sport as Baywatch was about lifeguard techniques and Britain’s Got Talent is about British people having talent”). Sports coaches, teachers and parents all deal with children who fail every day. This book is about how to show them that success can come from that failure. What matters is how we deal with it when things go wrong, as they inevitably will do along the way. One day we’re going to write a set of resources all about making mistakes. Too many children have such a fear of getting things wrong that they won’t suggest answers or try new ideas.

As teachers, we’re in a privileged position — not only able to nurture young people, but to influence them too. It’s a big responsibility. One misjudged comment or harsh criticism from us can lead to dreams being forgotten and confidence squashed. With this in mind, ‘They Did You Can’ should be required reading for anyone in the business of influencing young people. It should be sub-titled ‘How Not To Stomp All Over Their Dreams’!

‘They Did You Can’ is packed with quotes, anecdotes and advice from many of the successful sports-people Michael Finnigan has worked with and interviewed (people like Clive Woodward, Gordon Banks, Martin Johnson, Phil Neville and Darren Clarke) as well as other greats in their field.

It is interesting to note that in the list of famous names that crop up, several are not just known for their achievements, but are just as well-known for having a great attitude. David Moyes springs to mind. As Everton manager he hasn’t won any silverware, but has been at the club over 10 years, achieving consistently on a tight budget and is regarded throughout the game as a good man as well as manager.

Last year, as part of our 365 Things To Make You Go “Hmmm…” we asked pupils who they most admired and wanted to emulate. Sports people featured highly on the list. Who better, then, to use to inspire our pupils to achieve their dreams?

In ‘They Did You Can’, Mike Finnigan plays the role of performance coach (something he does for elite sportsmen and women) and takes the reader through a series of activities to guide you to success. As usual we like to show you how a book could be used in your classroom, so here are three ways it could

- CHANGE HOW YOUR PUPILS RESPOND TO FAILURE:

- REMIND THEM OF THE BIGGER PICTURE:

Mike Finnigan provides a whole chapter on ‘The Reminder’, with activities asking questions like “Why am I doing this?”, “Who inspires me?” and “Who is in my corner?” These all serve as memory joggers when things get tough.

- TEACH THEM ‘SNAP OUT OF IT’ PHRASES:

Instead of getting bogged down with a task or losing their cool, teach your pupils phrases they can use to snap out of the negative mindset — words like “Pull yourself together!” “Move on; it’s over!” or “Forget it!”

- SHOW THEM THEIR GOALS ARE ACHIEVABLE:

One nice activity Mike Finnigan suggests is to write a letter to yourself from the future. Get your pupils to write a letter to themselves now from 10 years time, after they have achieved their dreams. Then, get them to write a similar message from 5 years time. It becomes easier to see how those dreams can be broken up into achievable chunks. Great for a PSHE lesson.

- TELL YOUR PUPILS HOW GREAT THEY ARE:

Attitude is everything and by believing in your pupils, you are giving them something to live up to. The author cites a particularly powerful story of Ben Carson, a troubled youth whose mother took to praising his school work and marking it daily. His grades improved and slowly he started to believe he was bright. One day he asked his mother to help him with some school work and she revealed that she couldn’t read. “All that time, his mother had been setting him work, marking it and praising him for how good it was and how clever he was proving he could be, and all the time he was faking it!” (taken from TDYC p32). Once Ben had the self-belief, he left his aggressive behaviour behind and started to achieve. Benjamin Carson is now 60 and is the world’s leading paediatric neurosurgeon. A little praise can go a long long way.

It doesn’t matter whether you are involved with sport or what subject you teach, do read ‘They Did You Can’. Read it for yourself. Read it for the future vets, artists, writers and paediatric neurosurgeons in your care. Don’t stomp on their dreams.

VIEW THIS BOOK AT AMAZON »