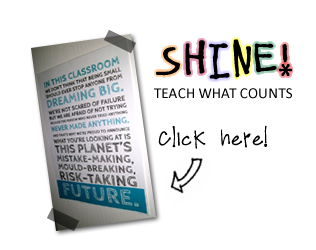 Behind every new idea, article or resource we do is usually something that inspired or provoked us into action. Our CPD posters were inspired by a poster idea we were sent by @paulyb37 on Twitter. The ‘M’ Files were provoked by a question we saw in a SATs paper and our ensuing annoyance! And our inspiration for Caution! Minds at work came from the work of a New York urban artist.

Recently we saw something that motivated us once again. It’s a TEDxTC talk given by Peter Benson in 2010 called ‘Sparks: How Youth Thrive’. Sadly, Mr Benson passed away in 2011 (we’d like to have sent him our thanks) but his message continues. It seems more relevant to our current educational climate than ever. Please take the time to watch this captivating message.


Our new resource is called SHINE! and its emphasis is on helping to make your classroom a place where sparks are nurtured and the focus is placed on things that matter. Out of all the resources we’ve made, this is the one we think is most important in the current climate.

Standardised testing has a lot to answer for in terms of dampening sparks in young people. After teaching mostly Year 6 for nine years, we’re convinced that SATs often do more harm than good in what should be the pinnacle year of a child’s primary school life. As well as the video, two other quotes resonate deeply. The first is this one:

The second is a Twitter profile description that struck a chord when we saw it recently:

In the above video, Peter Benson talks about a developmental study he had made about the things that make young people thrive. Unsurprisingly, it hasn’t got a lot to do with didactic teaching methods or standardised testing. As he says, “no one ever said ‘this child of mine, my fondest wish is to ace statewide benchmark maths and science tests when they are 16.’” Along the way, he examines the idea of a ‘spark’. The thing about a young person that gives them joy, energy and purpose.

It’s not a long talk and well worth investing twenty minutes in. We’d be interested in hearing what you think. Here are four things we thought were of note (to the powers that be as well as ourselves!):

1. THIS IS NOT WISHY-WASHY STUFF

We’re talking about the things that matter most to our students. Their driving force. Aren’t we supposed to tap into this in order to communicate effectively with them? Interestingly, Benson found that in his interviews, 100% of students asked got it. They knew exactly what he was talking about when he mentioned their “spark”. Two thirds of them could name at least one spark outright. What percentage of adults could do so? What’s happened to their spark in the intervening years? We have a duty to encourage and nurture, as Picasso’s quote implies. Their learning will benefit greatly — “Students learn best when they are known well,” Eve Gordon (Principal, MetWest High School).

There’s an episode of The Simpsons we’ve mentioned before (Saturdays of Thunder for the die-hards!) where Homer thinks he’s a bad father because he can’t answer the four question quiz from the National Fatherhood Institute — ‘Name one of your child’s friends’, ‘Who is your son’s hero?’, ‘Name another dad you’ve talked to about parenting’ and ‘What are your son’s hobbies?’ We’ve often thought it’s the sign of a good teacher to know the answers to these sorts of questions about our students. How much do you know about the children you teach? What is it about them that gives them joy and energy? In his talk, Benson says it is essential that we find out our young people’s sparks, that we name them and that we champion them. SHINE! will help you do so.

There are many things that can stifle the spark that gives a child joy and energy in learning. One of these is the pressure placed on our pupils at an early age by standardised testing. Yes, testing has its place, but these aren’t simple measures of progress — we’ve seen them destroy pupils’ confidence time and time again. At eleven years old. How often do you sit your class down and go through the many skills they’ve got that will never be tested? Does that mean they’re worthless? Is knowing how to multiply two 2-digit numbers using the grid method more important than having the gift of caring for elderly people? Why? SHINE! encourages your class that they’ve got all manner of skills that we don’t test and they are all the better for having them.

In Benson’s study the largest category in which pupil sparks fell was ‘Creative Life’. Hardly a surprise, but a worrying fact when you think about it in relation to our present government’s attitude to provision of the creative arts. Creativity is not only a key skill for innovation and flexibility in these fast-moving times — it’s the chief source of thriving for our young people. Here in the UK, Mr Gove’s plans to limit creative subjects means, in effect, limiting opportunities to thrive. Getting rid of sparks. As someone wrote on a website we saw recently: “…art, music and a genuine interest in becoming life-long learners shouldn’t come to a screaming halt at third grade.“

So, please take a look at SHINE!. But, more importantly, please be the sort of person who doesn’t just teach how to count, but what counts. It takes a brave person to admit that they care more about the people their students will become than the scores on the tests they take, but we’d encourage you to consider it.