A Message To All Year Sixes

UPDATE FOR TEACHERS No.1: When SATs are over, as well as the messages below, you’ll enjoy our SATs All Folks! lively post-SATs resources… [Click the image below]

UPDATE FOR TEACHERS No.2: If you find this post resonates in any way, you’ll appreciate SATs: a sparky approach where you’ll find some free alternative “homework” letters you can download and send out with your Year Sixes and a video to restore their test/life balance!

Amusingly, this post is now by appointment to the stars:

Having taught Upper KS2 for nine years, this post comes from experience. It also comes from tweets such as this one, which we came across today:

Now, if there’s one thing that rattles our cage, it’s seeing this kind of effect that SATs have on many 10 and 11 year olds. For many, what should be their best year of primary school, has become a year full of talk of SATs, Levels and past papers. What a shame.

As teachers, we have a responsibility to make SATs preparation as pressure-free as possible, but that’s easier said than done. Interestingly, the above was tweeted in January. Several months to go and already the pressure is setting in. SATs are often the focus of a year which, in reality, should surely be one of the most creative, most lively in a child’s primary education.

So, with Year 6 parents (and all sparky teachers who know there’s more to life than tests) primarily in mind, we offer the following advice to share with your children… This is the message all Year 6s should hear. There is no way that a child should be feeling pressure about SATs at all, let alone in January.

FOR YEAR SIX EYES ONLY: 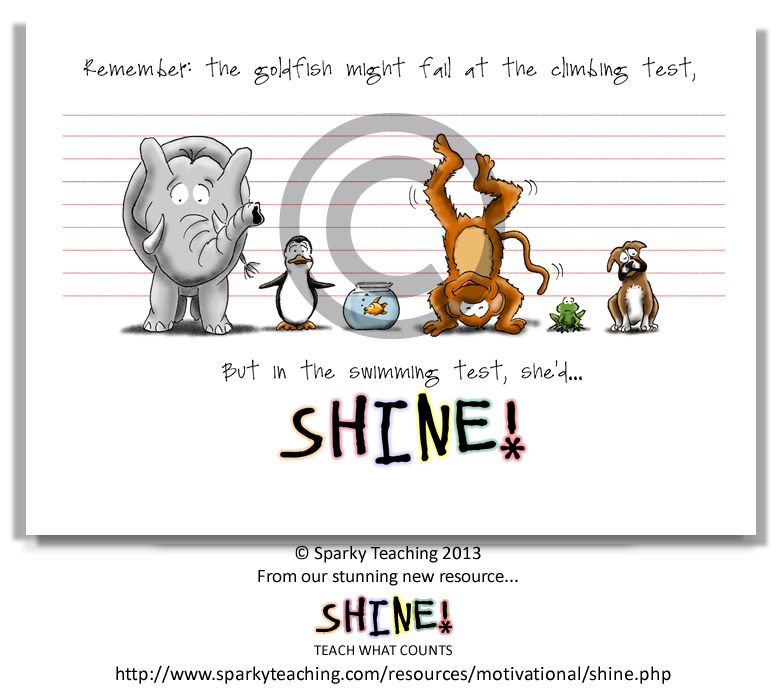 Although the goldfish wouldn’t find the tree-climbing test too easy, in a swimming test she’d shine.
Just like you do at the things you are good at.

Not every skill is taught in school and even less are tested. You might be a great golfer, fantastic at fashion design or have got green fingers… You might be a people-person, a problem-solver or a poet. SATs are never going to show off all these amazing skills.

Having taught Year 6 classes, we’ve prepared them for SATs and (believe us) we don’t like them much either… In Wales, where we are based, children don’t have to do them. Please try your best to think of them as “something I’ve got to do, but not the most important thing in the world.” The problem is that sometimes we teachers can make them seem really important, without noticing what we’re doing. We have school targets we hope to meet and our school has Government targets it hopes to meet. It’s like one big chain and there’s only one person at the end of it… 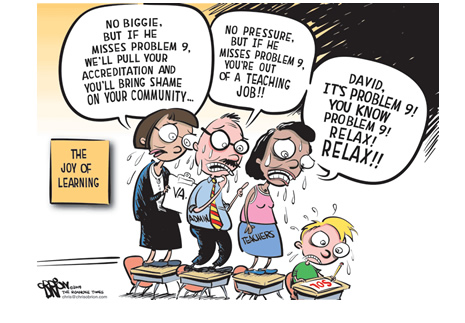 But remember this: When you were born, no one said “What I want for this child is a Level 4 in Maths!” (that would have been slightly weird!) The big things, the most important things are things like your personality, what you believe and think, your ideas and that spark inside you that makes you you.

In a year’s time, you’ll have forgotten about SATs, but don’t forget this little poem we made up… It might come in useful! Cut out these words and stick them somewhere you’ll see them (be inventive! try your ceiling or forehead!): 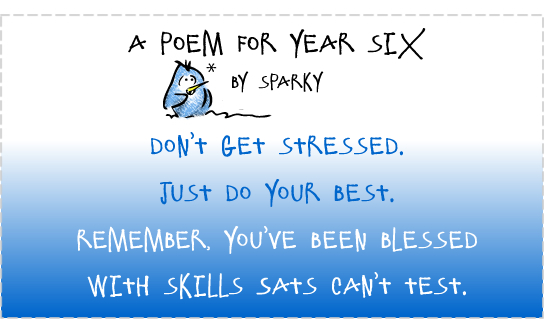 We don’t like SATs either, but we hope that’s a help.

Download a free poster to help you by right-clicking here.

FOR PARENTS AND TEACHERS:

Not wanting you to feel left out, we thought you’d like a poem too: 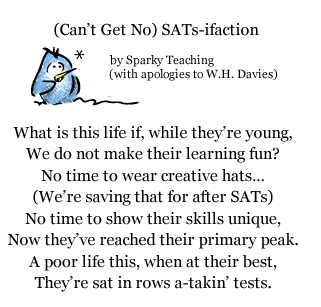 Download a free PDF letter and video to use with your Year Sixes (based heavily on the messages on this page). You can find them here.

One thing we’ve pondered is the idea of how to show our students that we don’t mind how they do, as long as they do their best — the idea that they’re not defined by a number or a score. As well as SHINE! and Messages That Matter, we had the idea of creating a reward to celebrate character, not achievements… This would be send home a powerful message if you could reward your students before their SATs… Just an idea:

We’ve put together a series of resources for ensuring that whatever SATs revision has to be done, doesn’t have to be an endless trawl through past papers. Firstly, our mischievous alter-ego The Ministry of Maths are part of a resource we’ve made called The ‘M’ Files and you may find their #SATsTip tweets useful if nothing else (they’re Ministry_Maths on Twitter. The idea behind them is that they’re the evil people who write Maths SATs tests* and as we get nearer to SATs time, your child/pupils may find their bad advice helpful (in an “I-won’t-be-caught-out-by-any-of-their-tricks” way). Here’s a taster:

In addition, there’s The League of Literacy who are an organisation with the aim of weeding out the bad grammar and punctuation in the city. Think Dragnet meets SPAG tests (SPAGnet?).

*NB. Just to clarify in case Mr Gove reads this (perish the thought!), The Ministry of Maths may not actually write SATs tests, although if they did, they’d probably do something like this:

If you haven’t checked out our SATS: a sparky approach page, you might find more encouragement there…